A Saint Worth Knowing

This week I am sharing a blog from Grow Christians. It is too good to keep to myself. If you appreciate it, I encourage you to sign up for their blog, too.

Argula von Grumbach and the Saints We Do Not Know

Argula was — for a while — a wife, mother of four, and extremely privileged. Until she started speaking out.

She grew up in a Bavarian family where spirituality and education were highly valued. In the year 1500, she received her own German language Bible at age ten. This was at a time when lay people (not to mention young girls!) were discouraged from engaging directly with scripture.

When Martin Luther’s ideas began circulating, Argula read everything he and his collaborator Melanchthon wrote. By 1522, she frequently corresponded with Luther directly about his ideas, but was never invited to publicly participate in Reformation activism because she was a woman. Things started to get really complicated when a local university student was arrested for having Protestant views, illegal at the time, and she wrote an outraged letter to the faculty at the University of Ingolstadt. In her letter, she declared that they had condemned, not refuted Protestant ideas, “what have Luther and Melanchthon taught save the word of God?”

She cited 80 passages of Scripture in her theological defense and, as we’d say now, it went viral, going through 14 editions in two months.  Close readers of her life find evidence that she suffered violence at home, and her husband lost his job, sinking the family into even deeper chaos. Argula kept writing and outlived  them all (unfortunately including three of her four children). In 1530 she met Luther one on one.

Of course I’d never heard of her.

One of the things I love about reading and writing for Grow Christians is trying to find the clever question or connection about the saints of the church. Trying to find something new and flashy about someone I *think* I know is great. It’s a different story when I’ve never heard of them!

In a lecture about one of her books, New Testament scholar Amy-Jill Levine declared about women “absence of evidence is not evidence of absence.” Argula is a reminder that when when the stories of women are actively repressed as hers was, it does not mean they were not there. Women and LGBTQIA+ persons have been part of human history since the beginning of time, even when those with power prefer their silence. 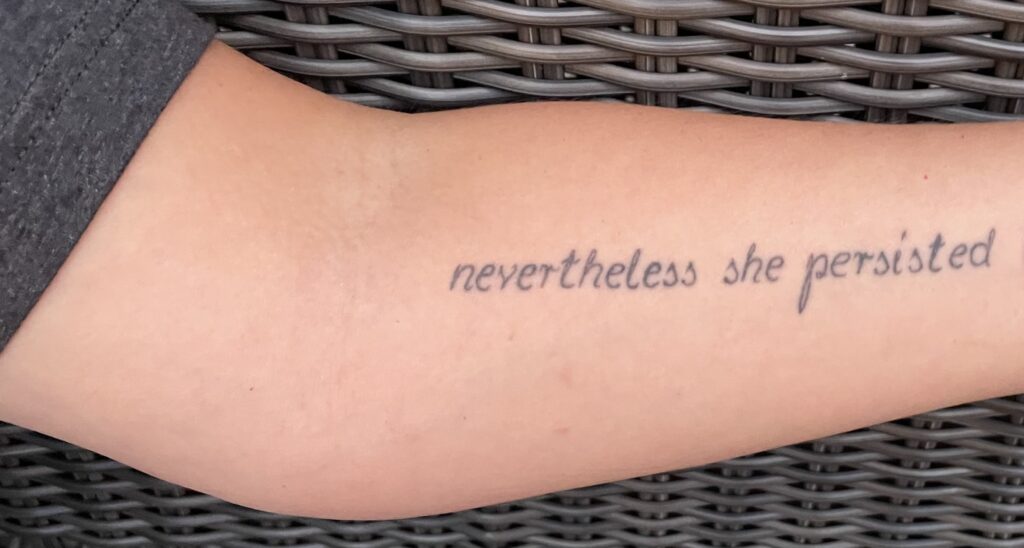 nevertheless she persisted: arm tattoo, friend of the author

The radical thing about engaging figures like Argula is just knowing who she was. Regardless of success or approval, Argula would have done the things she did because her conscience propelled her forward. The only clever question I am come up with today is to ask myself: what am *I* willing to do for the Gospel with no assurance of success, acclaim, or impact?

PrevPreviousCome Let Us Worship and Bow Down
NextWho Was Mary Magdalene?Next

Serve your community and create change with Katie’s Clothing Closet, our Winter Warmth Project or our CHOW Pantry. Please leave your contact information below and we'll be in touch!